WHAT DOES A PILOT IN THE IRISH AIR CORPS DO? 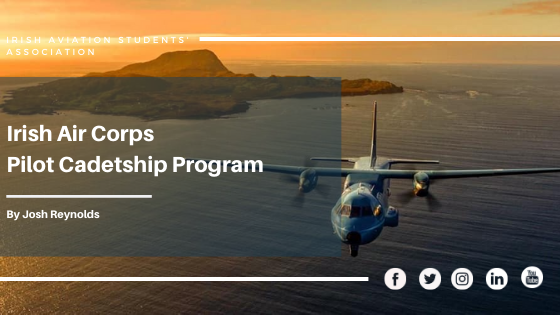 When you hear the words ‘Irish Air Corps Pilot’, what do you think?

Perhaps you know very little and have only been exposed to them at air shows like the Bray Air Display. You may know a bit more. You may have some questions. What does a Pilot in the Air Corps do? What aircraft do they fly? Why should I consider joining? How do I become a Pilot? I will try to answer these questions, which may be of benefit as applications for the Irish Air Corps Pilot Cadetship opened recently and will stay open until the 31st of May 2020. Maybe you’ve already applied, thought about applying, or never even considered being a Pilot in the Air Corps, but having a good insight is always helpful.

So what does a Pilot in the Air Corps do?

Pilots fly the Air Corps’ fleet of fixed-wing and rotary aircraft. As military aviators, they are tasked with a variety of operational missions, both at home and abroad in support of the State. This includes Air Ambulance, Maritime Patrol, Garda Air Support (yes, Air Corps pilots fly the Garda helicopters), Aerial Firefighting, Ministerial Air Transport, ISR (Intelligence, Surveillance and Reconnaissance), Inter-hospital Transfer, Top Cover for Search and Rescue, Troop and Cargo Transport, and many more. Other tasks that are non-operational include training future pilots as a Flight Instructor, Ceremonial Displays and Public Displays at air shows both at home and abroad.

Following their military training, Cadets are commissioned as Officers in the Defence Forces. This means that they are leaders within the Defence Forces and also have secondary roles such as Flight Safety, Logistics, Risk Management, and other administrative roles.

What aircraft do they fly?

If you’re interested in flying both airplanes and helicopters, you’re in the right place. Air Corps pilots have the unique opportunity to fly both fixed-wing and rotary aircraft.

As earlier mentioned, Air Corps Pilots also operate and fly the Garda aircraft which includes two EC-135T2 helicopters and one Brittan Norman Defender (to be replaced by a PC-12).

Quite a varied fleet.

Why should I consider joining?

There are many benefits to being an Air Corps Pilot. Firstly, it’s free to join and become a pilot. In fact, you are paid from the day you join and all the way through training. You also get free medical and dental care, as well as free college tuition. As mentioned earlier, you get to fly a wide range of aircraft. Training on the PC-9M compared to a Cessna 152 is like comparing an F1 car to a Nissan Micra (nothing against Micras!). After this training you can specialise on fixed-wing or rotary aircraft. You can then fly to save lives, catch criminals, protect Ireland’s interests, and make a difference to peoples’ lives at home and overseas.  With pilots flying at low level, wearing night-vision goggles, or pulling up to 7G, flying in the Air Corps is unlike any other. You also get dashing uniforms, flight suits, flying pay, Military Service Allowance, promotion to higher ranks, and a minimum of 31 days annual leave.

How do I become a Pilot?

Applications are currently open under ‘Current Competitions’ under the Careers page at www.military.ie for the 2020 Air Corps Cadet Competition. Anyone wishing to be a pilot in the Air Corps must be awarded an Air Corps Cadetship following the application process. This process includes psychometric testing, a physical fitness test, military and aviation assessments, personality questionnaires, group assessment, interviews, and medical examinations. Strict requirements must be met to be eligible.

If successful, the applicant will undergo approximately 17 months of military training in the Cadet School (Curragh Camp, Kildare) alongside Army and Naval cadets. This training includes weapons training, tactics, physical training, communications, and academic studies. This is done to develop character and leadership skills.

On completion of this training, cadets are commissioned as an Officer. The next stage of training is the Wings Course at Casement Aerodrome (Baldonnel, D22) with the Air Corps’ Flight Training School. This course usually takes 15 months and includes ground school (up to ATPL level) and flying training from basic to advanced flying. Upon completion of the Wings Course, pilots make their preference to fly fixed-wing or rotary aircraft and are required to serve for a minimum of 12 years.

When you hear the words ‘Irish Air Corps Pilot’, what do you think?