IMPACT OF DRONES ON AVIATION 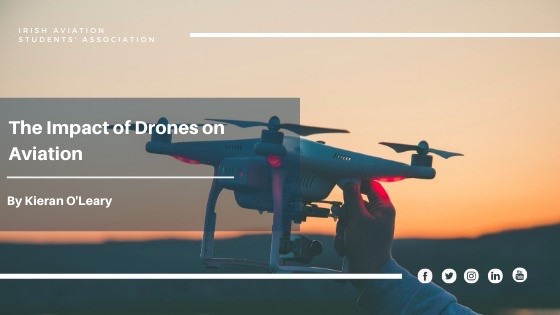 Today, drones have become increasingly popular in aviation, especially when it involves delivery services or for recreational use. This breath-taking innovation has transformed the way we deliver goods, capture pictures and defend the skies. From a business perspective, drones increase both efficiency and quality, while hugely decreasing costs. In terms of the military, they provide an advantage against their opponent, whilst posing no risk on their own personnel. However, with great inventions, come some threats. In the wrong hands, drones can infiltrate people’s privacy but also cause great hazard for air traffic in the busy skies we had pre COVID-19. While drones have caused some negative impacts on aviation, however, the positives outweigh them significantly.

Most recently, we have seen an increase in popularity for drone delivery services. Many delivery companies have looked into the idea of implementing a fleet of drones in the near future, to further enhance their logistics performance. To be honest, it is not surprising that these companies such as Amazon Prime Air, DHL, Dominos and UPS are all attracted to investing in a new effective form of delivery transport. These highly advanced aircraft are capable in reducing both costs (fuel and labour) and delivery times for the company, which in turn, gives opportunity to expand the company’s network, with the extra cash and time utility. As we will see further investment in drone delivery, we can expect an increase of drone traffic in time to come.

One such operator who is paving the way for drone delivery in Ireland is Manna Aero. The operator has already begun delivering fast food to the UCD area through Just Eat and Camile Thai, at a promised delivery window of less than 3 minutes! However, even though the company lost out in business with food deliveries not being permitted at the very beginning of the Irish lockdown, they have adapted to this and instead, delivered medication and critical supplies to the isolated elderly cocooning. This brilliant initiative has supported those most at risk, by completely minimising human interaction during the delivery process. With a now temporary surplus of commercial airline pilots in the aviation industry, the demand for pilots within the drone industry could save hundreds of pilots from unemployment and wasting their valuable skills.

One such factor we have seen that caused a boom in drone use, is the price to operate them. In recent years, with demand rising for drones followed by new manufacturers entering the markets, we have seen the price of great quality drones falling to a level that is considered as affordable. These affordable drones have not only been used for recreational use but for filming and surveillance purposes also. The ability to hover at a fixed point in the sky, at places humans or even helicopters could not access, has been widely used within the film, agriculture and many other industries that require video feed from an altitude. The use of drones for surveillance has been especially useful to farmers keeping an eye on livestock across their vast farmland.

Even though drones became hugely popular over the last few years, they were in fact invented and used centuries ago, dating back to 1849 where drone use was first recorded. This was solely for the purpose of military exercises. Back then, and even now they pose to be one of the greatest assets in combat and defence for the military. The ability to gun down opponents’ armament or detect enemy activity, can determine the success of the military’s mission. Better again, no personnel are sacrificed, as the aircraft is manned remotely from a far and safe location.

Where drones can be of great use for day to day activities, the advancement of drone technology can pose a risk to the skies. In terms of privacy, drones can infiltrate any human’s property from the air and exploit this information. With increased drone traffic in the skies, this could potentially cause catastrophic consequences to commercial aircraft operating at nearby airports. The London Gatwick Airport incidents was a great example of drone abuse that you may have remembered. For several days, hundreds of flights were cancelled, as the airport was forced to close off its airspace to all inbound and outbound traffic to prevent any mid-air collision. The sightings of numerous drones caused the airport to close its runways intermittently which was an obvious nightmare for passengers, airlines and air traffic controllers during those 3 days of disruptions.

However, the usage of drones has offered much greater benefits to aviation than the very few threats they can pose. They have made day to day life easier, have cut huge operational costs for organisations and without a doubt, have already saved thousands of lives and will continue to do so, to protect and support humans.