CRISIS POINTS IN THE HISTORY OF AIR TRAVEL 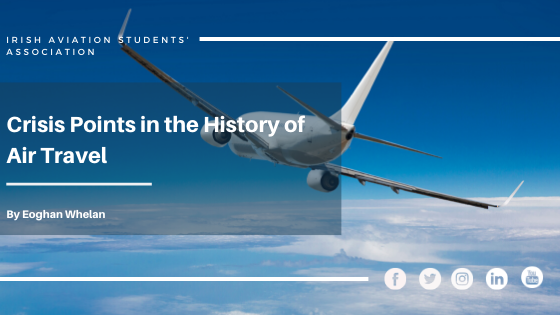 When thinking of low points within aviation history, the most immediate thought was the challenges associated with regaining the industries integrity post the 9/11 terrorist attacks but one often also thinks of the SARs Virus in the early 2000s and the 2008 financial crisis. The forecast post these stumbling blocks were bleak and many thought that commercial aviation would suffer greatly. However, the industry continued to bounce back better than ever with increased security restrictions, lower costs associated with air travel and giving the citizens of the world access to all of its four corners.

The plight of the recent COVID-19 pandemic combined with Brexit within the European Union will put a strain on air travel as we know it. Tourism has fallen off a cliff edge and thus so too has the aviation industry, in all but freight travel. However, it would be grim to assume that the industry will decline indefinitely yet many of the top aviation experts across the globe have yet to have their say.

9/11 presented unprecedented challenges for an industry which before this, was booming. Traffic was reduced by up to 31% across the industry in the five months post 9/11 and cost the industry in North America an estimated $10 billion a year from 2001 – 2006 but 9/11 was not an economically driven impact like COVID-19. The industry did bounce back, however, this was after copious amounts of focus going into restoring the publics opinions on the safety and integrity of the industry. 9/11 challenged the industry across the globe like no other before it and drove many of the major US airlines such as Delta and United into bankruptcy. Although these airlines recovered it is estimated to have come at a cost of up to $71 billion from 2001-2015. The difference here is that Legacy Airlines must now move swiftly to protect themselves and ensure they can rebound into the future according to Sean Doyle, CEO of Aer Lingus. The survival of the US industry, in particular, came at the cost of competition as pre-2001 nine airlines controlled 80% of the market, shrinking to just four airlines through many mergers and acquisitions and this in combination with good network effects from certain airlines was how they survived this crisis. This I believe is avoidable in the current crisis and once airlines attempt to ensure a fiscally strong plan, they should have the ability and liquidity to weather the storm.

The SARS virus, which originated in 2003, made its mark on the industry with a reduction of 39 billion revenue passenger kilometres. This outbreak came at a time when the industry was recovering from the effects of 9/11, however this time the epicentre of the crisis was located on a different continent. The virus as a whole cost airlines an estimated $6 billion. What this crisis did teach the industry was that air purification onboard aircraft can play its part in keeping passengers in a hygienic environment. The invention of newer models such as the Boeing Dreamliner 787, the Boeing 777 and the Airbus A350 all have smart filtration systems. The Boeing 747 sat on the alternate side of the air purification spectrum and hence a contributing factor combined with its age as to why so many airlines have now fully retired its 747 fleets. The biggest factor upon which an airline can survive is its ability to maintain liquidity and this is a lesson the industry learned after the SARS pandemic. Many airlines now keep substantial cash balances on their books to ensure that they can alter the organisation more fluidly without filing for bankruptcy.

The 2008 financial crisis presented unprecedented challenges for a struggling industry only back on its feet post SARS and 9/11. Similar to both of these other crises, airlines looked set to lose upward of $9 billion as they battled to stay afloat. To counter the recession that followed, airlines like KLM, Cathay Pacific and Lufthansa scaled back their operations and reduced capacity to keep their businesses operational. The industry must now do the same to survive this storm, maintaining cargo/freighter operations may be the key to this.

In a recent interview, conducted by the Chair of IASA Daniel Tetis, Sean Doyle the CEO of Aer Lingus outlined his views on the impact that COVID-19 is having on the industry. Having lived and worked through 9/11, SARS virus and the financial crisis, Doyle knows all too well the impacts that these crises can have on the industry. Whilst it is a challenging point in the history of the industry, he believes that it’s at these times where the industry necessitates a change that with it will come new inventions and changes to traditional ways of doing things.

The aviation industry has had many ups and downs over the last two decades and has survived the challenges which these brought with them. It is now essential for airlines to act to protect their staff, fleet, and operation as a whole to ensure that the industry can return to its 2019 peak helping citizens of the world to explore. Whilst change and times of crisis can seem scary, they often present unprecedented opportunities for change and innovation within businesses which ordinarily would take years to implement.