AIR CARGO AND ITS ROLE IN THE FIGHT AGAINST COVID-19 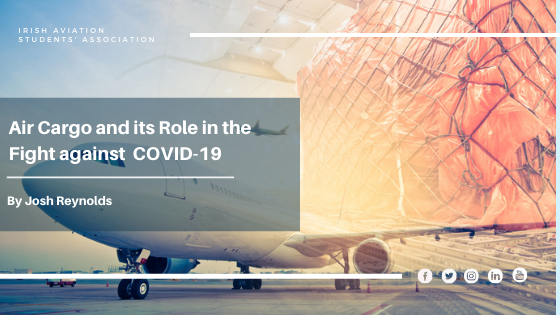 Cargo airlines usually operate out of the spotlight and can sometimes even be forgotten about. Flying largely at night and with older fleets, cargo airlines are rarely in the headlines. This of course has dramatically changed in recent weeks and months. If someone said the words ‘air cargo’ to me this time last year, I would have thought ‘overnight shipping’ and ‘Antonov AN-225’. Ask anyone about air cargo today and immediately it’s ‘PPE’, ‘supply chains’ and ‘delivering aid’. So, what is air cargo, and how is it contributing to the fight against COVID-19?

Air cargo can trace its roots back to 1910, when the first cargo flight took place in the USA using a Wright Model B aircraft. Since then, it has grown exponentially. Air cargo is responsible for overnight shipping, the transport of high value and perishable goods and all other types of freight. Nowadays, cargo airlines are some of the biggest in the world. FedEx Express, the world’s largest cargo airline operates a fleet of nearly 670 aircraft. DHL delivers to every country in the world, including North Korea. UPS flies to more airports than any other airline with 815 destinations worldwide.

The fight against COVID-19 has brought out the biggest and best of air cargo. The world’s largest aircraft, the Antonov AN-225 Mriya flew in April for the first time in nearly 18 months. The aircraft flew to Tianjin in China to collect 100 tonnes of medical supplies before delivering them to Warsaw via Kazakhstan.

Closer to home, Aer Lingus have been contracted by the HSE to fly medical supplies and equipment from China to Dublin. From applying for visas to securing overfly rights, a monumental effort was required in order to create the vital airbridge. Approval also has to be sought from the IAA in order to stow supplies in the main passenger cabin which was swiftly approved. Over the course of the operation, the A330 aircraft will ferry 600 tonnes of equipment which can be used on the frontline in the fight against COVID-19. Other unusual movements include a Magma Boeing 747-400F which landed in Dublin on Monday, April 13th and a new weekly cargo flight from Dallas to Dublin being operated by an American Airlines 777-300 which is carrying critical goods in both directions.

Other passenger airlines have been creative in order to deliver cargo in fight against COVID-19.  Air Canada has transformed two Boeing 777-300ER aircraft by removing the economy class seats which has turned it into a hybrid freighter. More airlines are following suit, with Finnair converting 2 A350s, EL AL converting 777s and Lufthansa removing seats from four aircraft. The majority of these aircraft will be flying routes to Asia in order to collect critical medical supplies as well as normal cargo. The removal of the seats reportedly allows for up to 50 tonnes more in additional cargo.

Some of the stories from the latest air cargo operations are truly inspiring. The Aer Lingus pilots who volunteered to fly to China and everyone else behind the scenes have made the whole nation proud by contributing to the effort to defeat COVID-19. The way in which airlines have adapted and transformed their operations to meet the current demand for medical supplies in such short time is staggering. Also, seeing the world’s largest aircraft flying again shows that air cargo is pulling out the heavyweights in this current fight.

Many of us are worried about how the aviation industry will look when the dust has settled. Personally, I am proud to be pursuing a career in an industry that is doing so much good in such terrible circumstances. This current work will breed new opportunities for air cargo and aviation as a whole so that more can be done in the future. Air cargo has often operated in the background, but I believe that has now changed forever. The impact of air cargo in times like these cannot be understated and I am thankful to all involved in the fight against COVID-19.