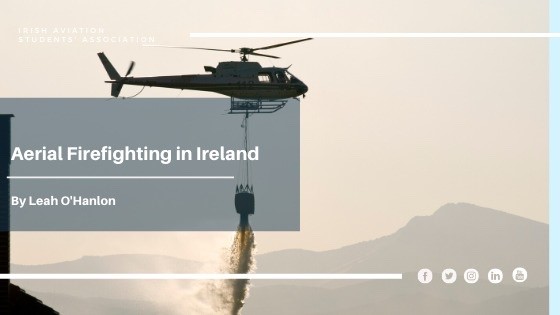 The majority of us are used to seeing wildfires in the media and would be likely to associate them with the hot sunny climates of Australia and California. Throughout the course of 2020, we have already seen a tremendous amount of forest and bush fires raging across the world and in particular in these areas, starting in California where at the end of April over 888 fires had burned over 1482 hectares of land, and also Australia where a record breaking heatwave ignited massive bush fires which burned 858 hectares of over a number of months.

Although this weather is not typical to Ireland, considering the farming and agriculture background in Ireland it is very familiar to witness mountains burning. Farmers are used to burning gorse in dry weather to promote new grass growth, these are known as ‘controlled fires’ although regardless of this, these types of fires are not promoted and the risk of them burning out of control could lead to typical emergency services being unable to deal with the sizes of such fires, to a point where they require specialized intervention.

In the past few weeks of sunny spells across Ireland and the urge for people to maintain distance outdoors and partake in more outdoor activities, for example camping and barbequing, I have come to see that the idea of these ‘wildfires’ are definitely not confined to these countries or climates, and can be found much closer to home than many people may expect.

Some of you may be thinking, where does aviation come into play in this discussion? And thankfully in many situations, it doesn’t. Although in some situations, such as large gorse fires and perhaps even campfires that weren’t extinguished correctly, aerial firefighting can have a major impact and could be the difference between safety, and major loss and devastation. Aerial firefighting involves an aircraft (most commonly a helicopter) with an underslung bucket – a bambi bucket, where water is collected in local lakes and shores to help combat larger scale fires that are at risk of going out of control. In rural Ireland the lack of infrastructure makes aerial firefighting a priceless resource as otherwise on many occasions, it may be next to impossible for land firefighters to have access to the blaze.

It is not uncommon in these kind of situations for aerial firefighters to be deployed. In Ireland the main provider of aerial firefighting services comes from the Irish Air Corps where in 2019 they dropped 96,125 litres of water and in 2018 – 872525 litres as they were also deployed to help tackle fires in the north of Ireland. Although it has recently come to my knowledge that Coillte IN CONJUNCTION OF Executive Helicopters also has the resources to provide helicopters to tackle larger scale fires that may pose a threat to forestry.

In the recent weeks of good dry weather, in an unfortunate series of events I got to witness days of aerial firefighting from my back garden, where a campfire that was not extinguished correctly blazed across the mountains in north Louth no more than half a kilometre from my home, for more than seven days. As these fires worsened and became more widespread across mountainous areas the land fire service found themselves unable to access and tackle the blaze, which called for aerial firefighting to take place. Over the first week I watched on as a helicopter provided by Executive Helicopters to Coillte worked tirelessly on making incredibly low and dangerous trips back and forth from lakes on the mountain to affected areas, carrying and dropping thousands of litres of water over and over in an attempt to save peoples homes and families. As the risk of damage got greater the Irish Air Corps were deployed, where similarly, the Air Corps made countless low and dangerous flights to a lake on top of Slieve Na gCloc, and to the Irish Sea and back carrying water for hours a day until the fires became under control. Just from watching this aerial firefighting I could see with my own eyes how much of an impact that it had on these fires, as up until the aerial firefighting started countless houses were evacuated with major risk of houses being caught up in the blaze. Likewise these firefighting actions have also had lifesaving effects on the many other similar situations that have happened in Ireland before and no doubt will continue to happen in the coming summer months.

After having the privilege to catch up with a local firefighter who was called to the fires in Jenkintown last week I was told that “the work of the helicopters was the difference between smoke damage in houses and houses being ash, we didn’t stand a chance without them”. From this alone it became clear to me that I aerial firefighting has a huge impact on the safety of the people of Ireland when it comes to fire, and in situations like this, also helped to stop the priceless forestry, walking trails and scenery that Jenkintown, county Louth is renowned for.

Fire safety knowledge is invaluable – stay safe, be careful when lighting, or being around fire, and rest assured that if a situation similar to the one I was trapped in ever happens to you, that Irelands aerial firefighting services will do everything they can to keep people, houses and land safe and undamaged.